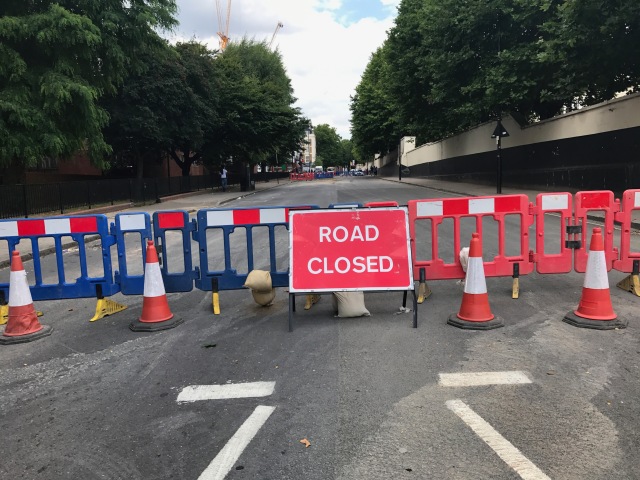 Yet another water leak in the area, this time at Pentonville Prison jogged memories of other leaks along the Cally and nearby.  The leaks below are all within 500 metres of each other along the same road.  The February leaks are uncannily close to the site of this week’s major incident.  Water pipes burst all year round – in hot weather it can be due to the ground shrinking causing movement (same as subsidence in your house – note the rows of mature trees on each side of the road here) or due to the pipe itself swelling in the heat, causing a crack.  Some hot cities in the USA have terrible problems, Houston for instance. Islington seems cursed by huge water main leaks and the council has set up a review under the policy and scrutiny committee.

Thames Water commissioned a forensic independent report by engineer Paul Cuttill into trunk main leakages which makes for a fascinating read.  Islington Council heard evidence from the author of the forensic review (Minutes).  As a former bureaucrat myself, reading between the lines, it simply sounds like Thames are not sufficiently incentivised by the regulator and the courts to plan for and deal with major leaks properly.  The situation described by Cuttill would likely be criminal in gas and electricity.

In this example Cuttill appears to say in fine management speak that Thames Water operational staff can’t find the off switches (valves) reliably despite their perceived location having been (expensively) recorded on an electronic geographic information system:

‘Valve information is held on GIS, providing details on location, valve position, and automation. Having reviewed the documentation and the deep dives it is clear that valve information, including location and position, is available for use to operations staff. There are documented instances where the information is not reflective of the reality on the ground. This misalignment of information can prevent maintenance teams completing their roles effectively.’

In my opinion, as people are very rarely killed by a water leak and the damage is economic there is only a light sanctions regime in place for Thames Water.  The existence of this regime makes a class action unlikely.  And so, facing a colossal bill for repairing and replacing the elderly mains it is rational for Thames to dawdle along.

Thames Water is producing its own broader review of trunk mains that will report ‘this summer’ with an action plan, according to the then Secretary of State.

(Letter from Secretary of State to Chair of Select Committee)

This week, a massive chunk of the Cally is closed to through traffic and buses are diverted – here’s a few memories of previous leaks. 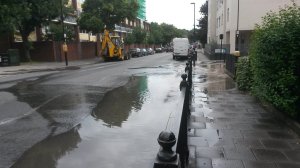 On Cally Rd, there's a further leak outside the prison and yesterday another burst at Kember street junction.

Can someone please fix the water leak in Caledonian Road/market Road before someone starts building an ark!!! @IslingtonBC @thameswater

@thameswater Thanks for fixing bad burst outside Yasar's at 319 Caledonian Rd. Other smaller leak outside 315 since before Xmas though.

Who do I report a water leak to? Has been like this for the last month under Caledonian Road & Barnsbury station bridge http://t.co/lkeQj1xm

I asked Thames Water’s press office for comment, but they did not get back to me at the time of writing – they would be welcome to add to the comments.

Active in Kings Cross London and South Oxfordshire, founder of Talk About Local, helping people find a voice online and a trustee of The Indigo Trust , Good Things Foundation and ThreeSixtyGiving as well as Connect8.
View all posts by William Perrin →
This entry was posted in Anti Social Behaviour, Planning, Licensing and Regulation and tagged cally road, thames water. Bookmark the permalink.