Dreams of Kings Cross, a comment on proposed changes on the gyratory system

Posted on February 10, 2016 by Daniel Zylbersztajn 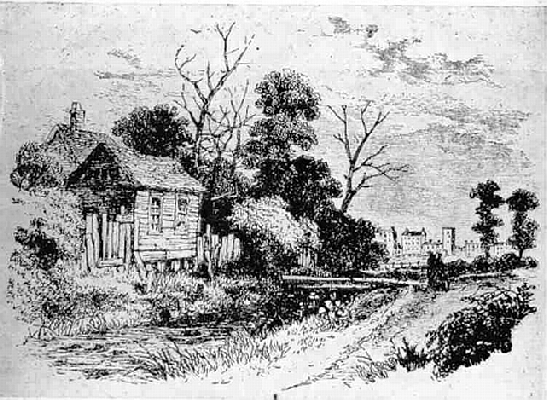 There was once a green valley with a pretty stream, before they dumped without any consideration all their rubbish and poo in the waters, so it became poisonous and smelly and rather than stop their activities, they tunnelled the stream up, and built heavy bricked roads over it. Once the horse drawn carriages disappeared, the roads were enlarged with tarmac to only serve people sitting in streams of cars in traffic jams down Penton Rise and Kings Cross Road and the surrounding roads.

It is worth remembering, that what you see at Kings Cross is relative to time. The town and road planners of tomorrow would do no wrong to remember Kings Cross’s origins and the many mistakes of the past that transformed this place beyond recognition, if a medieval time traveller were to emerge here.

One of our demands was far from a restoration of those green valleys of once upon a time. We who live here simply wanted to see the ultimate madness of the gyratory system abolished, which had transformed this place into an urban motorway.

Now we have a new proposal suggested by TFL changing almost all the roads into two-way traffic streets. Can we believe it? After all, different local people campaigned on this issue alone for two or three generations, starting some 30 or 40 years back!

So the promise is, that we won’t any longer have speeding cars on various roads offering up to three uni-directional lanes anymore or illogical, non-direct traffic flows, forced through local communities, with residential blocks on both sides. Vehicles that frequently fail to stop even to a family with small children standing at some of the local zebra crossings, enforcing the right of the motor car owner or driver – who rarely lives locally – with an erect middle finger and four wheels.

If these plans are really implemented, perhaps even insecure cyclists will be able to navigate around these corners, let alone that family with kids, and go for a stroll down on Kings Cross Road, or cycle to shop on Caledonian Road, no longer needing to cycle on the pedestrian paths, or as traffic wardens like to remind us, dismount and push.

Cities need change and leadership, and it is important that TFL and the London Mayor along with the local boroughs of Islington and Camden had a good and proper think about this.

Whilst some must continue to be allowed to access the stations of Kings Cross and St. Pancras with cars, especially those with mobility issues (but the truth is, that this is the minority of car users), along with some delivery vehicles, there should no longer exist that message, that travelling by car – through an area, with more alternatives by bus, train, and tube connections, than anywhere else in London, with millions of people on their feet here each day, and thousands others on bikes – should be the only law and right that counts.

But alongside the also announced speed reduction at Kings Cross to 20 miles, a further toughening up of the congestion zone, the announced possible extensions of the Ultra Low Emission Zone (that all candidates for the London Mayoral Elections uphold), new electric and better hybrid taxis and buses, new regulations on HGVs, tougher guidelines on work based parking, as well as continued increases in cycling, including work-bikes serving businesses, Kings Cross may just become a place, where roads can be braved by anyone wishing to cycle or walk and hopefully, where air can also become much cleaner (well that is actually also a legal requirement and WHO / UN concern).

In spite of its property market and desirability in terms of cultural diversity, the roads and traffic of London have so far made it score quite low in ‘liveable cities’ assessments. Kings Cross roads are one of its worst examples. If the proposed plans get it right, the road designers should get knighted, if you asked me.
But we the people who live at Kings Cross have had many promises given already, and few delivered. Two-directional road lay outs had been on the menu a few times already, including several consultations. But in the end no planner or politician was brave enough to implement it. >>Car<< was held to be king, mighty and all powerful, perhaps even crucially  an election shifter for at least the last 50 years, and our arguments were held to be pitiful and regressive “in the wider spectre of things.”

Really? Lucky are those who outlive the despotism of yesteryear to only find out, you were right in the first place.

With Eurostar at its feet however, the dangerous traffic chaos of Kings Cross is currently the immediate introduction of the lack of policy and foresight to any London visitor straight after his or her arrival. So yes it is truly great, TFL are set to change that and make Kings Cross and London more progressive, safe and forward thinking in that regard.

The slogan for us remains though – and please excuse us, for we talk from experience – we believe it, when we see changes implemented!

When a water pipe had burst under the tarmac of Weston Rise and water in masses run down that steep road, pooling on the bottom of it, where it meets Kings Cross Road, this winter, one could almost remember a far gone moment, when Kings Cross was more than just a road planning problem. Urban road and pipe specialists were soon on site to rectify the leak. But if you asked most local people today, what version of Kings Cross they would like to see more of, you know it is not going to be road enlargements and cars they would choose. The plan we have in front of us now is not the removal of the roads as such, but their better management, so that it serves all road users. Considering all, this is probably the best Kings Cross can now hope for, given the circumstances and accumulated human (in)actions of several centuries.

In that sense hooray to forthcoming two-way traffic streams. Perhaps the roads will calm in some hours so much, you can just about hear the distant torrents of a bricked up and piped up continuously flowing river deep underneath, dreaming of another Kings Cross through its water – not engine – roaring echoes of the past.

12 Responses to Dreams of Kings Cross, a comment on proposed changes on the gyratory system