Posted on February 5, 2015 by William Perrin 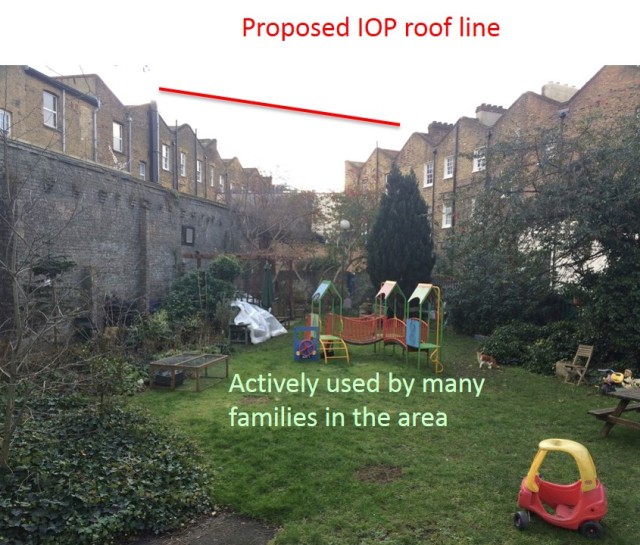 The controversial plans for the Institute of physics building at 4 Balfe Street go to planning committee for decision tonight (1900 at Town Hall on Upper St). Cabe Franklin who lives next door to the proposed building has found some substantial holes in the IoP’s case in these slides.

As Cabe set out and also in my view the IoP’s light data is wrong, they use misleading photographs and have some ludicrous numbers on economic benefits apparently based upon a 1994 study of an american community hospital.  And describe Cally Road retail as ‘derelict’ – the only retail properties derelict are those this site has been sitting upon for years.

Worryingly despite all this wonky analysis the council case officer is recommending that the committee approves the proposal – which in my view effectively flushes the conservation area down the loo – with barely any conditions.  Setting this precedent in the Keystone Crescent conservation area (busting through roof lines, unsympathetic materials, breaking of planning policies) will have a knock on effect for all Islington’s conservation areas as developers can just cite precedent.  Remarkably the proposed S106 agreement seems to make no allowance for local compensation for loss of local amenity.  It’s a very poor piece of public administration, in my view.

Active in Kings Cross London and South Oxfordshire, founder of Talk About Local, helping people find a voice online and a trustee of The Indigo Trust , Good Things Foundation and ThreeSixtyGiving as well as Connect8.
View all posts by William Perrin →
This entry was posted in Big developments, Planning, Licensing and Regulation and tagged @physicsnews, balfe street, iop, planning. Bookmark the permalink.