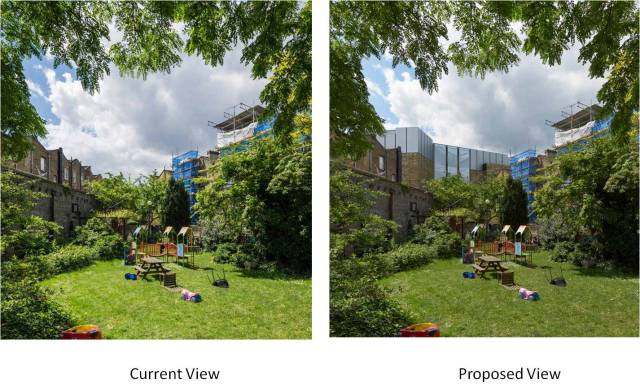 A local resident has secured a startling new artists impression of the building the Institute of Physics are applying for planning permission for at the corner of Balfe Street and the Cally Road (behind the cocktail bar).  This is the proposed view from the communal gardens – a huge wall of glass and steel to the South.  You can still comment – Islington accepts comments in practice up to the point of the decision making committee and have done so for many years, the 2 October deadline is just an administrative thing.   And this is new information so if it moves you to comment you have every right to do so but get your skates on.  The plans and the link for comments are online here.   The reference number is P2014/3577/FUL and our previous post is here.

The more I look at the Institute of Physics proposals, the more I think they have just got their approach wrong.   Their needs and plans are more than comfortably be fitted into this site in a conservation area.  And in tactics they would have been far wiser to have bought an option on the site subject to getting planning permission rather than snap up the freehold here – this was what the Whitbread team did on the corner of Wharfdale Road and York Way – they could see it was a sensitive site.

If I had to guess I think the IoP will withdraw these plans before determination and then submit something smaller in a few months, though given utility they seek from the building, it won’t be much smaller.  If the council turn this down, which they would have every right to do given the local plans and policies breached, particularly the conservation area then IoP are left with nothing.

It’s an old trick to withdraw when you can see a very risky planning meeting coming and when you come back a second time a developer usually reckons on a reduced local campaign and better chance at appeal.  Though people around KX are more determined than might appear.

Active in Kings Cross London and South Oxfordshire, founder of Talk About Local, helping people find a voice online and a trustee of The Indigo Trust , Good Things Foundation and ThreeSixtyGiving as well as Connect8.
View all posts by William Perrin →
This entry was posted in Big developments, Planning, Licensing and Regulation and tagged balfe street, institute of physics. Bookmark the permalink.