Posted on September 3, 2014 by William Perrin 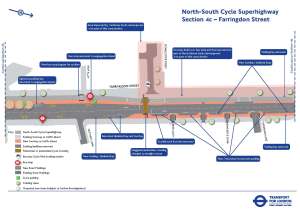 You could be forgiven for missing that there is also a North-South cycle route being planned to complement the ‘Crossrail for cycles’ that the media was excited about yesterday.  It’s less developed than the E-W proposal and, disappointingly the Kings Cross section isn’t ready for consultation yet.  TfL are in talks with Camden:

‘North of Farringdon station the route is planned to connect to a new ‘Quietway’ back-street cycle route connecting to King’s Cross. The details for this section are still being investigated with the London Borough of Camden and will be consulted on separately.’

Of course the big question is ‘What will happen to cyclists when they get to Kings Cross?’  Presumably even TfL wouldn’t just dump them into the gyratory.  If i had to guess I would think they would route people to Argyle Street.

One really interesting aspect of this proposal is the apparent abandonment of the insidious ‘smoothing traffic flow’ dogma the Mayor has been so keen on since 2008 and which we criticised here during the long campaign on cycle safety and the need for corporate manslaughter charges against TfL.   We said that:

‘Smoothing traffic flow’ has featured prominently in the Mayor’s policy document since ‘Way To Go’ in 2008 and is enshrined in his full transport strategy. Feedback from cycling organisations and elected representatives suggest that this policy is frequently cited as a reason not to make improvements to road junctions that increase cycle safety. The implementation of this policy, which is intended to benefit cyclists too has failed and the policy has been mis-applied diminishing cycle safety.

‘…a cycle lane would make the road much safer for cyclists but would reduce the throughput of cars at the junction – the throughput of cars wins over cycle safety. This trade-off rears its head again and again. Yet we have no insight into how it has this been evaluated – how does a minor inconvenience to traffic outweigh a fatally poor design. What cost benefit evaluation has been used? Given TfL’s strong engineering tradition there must be a simple mathematical formula used to make this calculation consistently across the network. The UK is a world leader in these forms of appraisal but TfL never reveals its workings.’

The North South consultation document says, with respect to an improvement at Farringdon:

‘Impact of these proposals on traffic capacity and pedestrian crossing times

Which you wouldn’t have seen TfL fessing up to five years ago.  They will be doing a more detailed analysis TfL says, so let’s see what emerges.  Could be a big shift in the right direction.

Active in Kings Cross London and South Oxfordshire, founder of Talk About Local, helping people find a voice online and a trustee of The Indigo Trust , Good Things Foundation and ThreeSixtyGiving as well as Connect8.
View all posts by William Perrin →
This entry was posted in Bad Gyrations KX Campaign, Transport and tagged cyclesafety, elephant, northsouth. Bookmark the permalink.