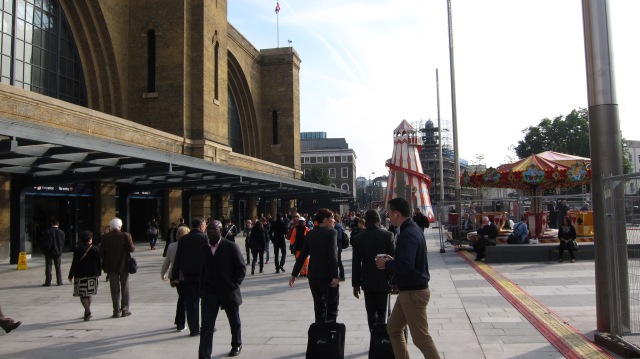 At last Network Rail and their partners have finished the Kings Cross station programme and now the Kings Cross community has a new public space to live with.  This morning, now the celebrities have departed we can start to work out how people might use the square. On a cursory inspection it is to sit around and have a fag or a snack while waiting for the train.  Or to be hunched over staring manically into a phone.  Sean has already written about an incipient litter problem.  It was never going to be a restful place as people charge about to and from the tube and of course those walking from the East can’t get in the station at the side any more.  It’s nice to see the news stand still there.

The space is currently cluttered, not un-attractively with a rent-a-carnival for weekend celebrations. And i am conscious of how polluted it is next to the dire Euston Road. But overall it’s a vast improvement on what was there before, built in extremely challenging technical conditions on top of the River Fleet conduit and the underground tunnels.  The eye-lid shelter looks a little heavy, but personally i prefer it to a light mock heritage design and suspect the heaviness is design will be some sort of bomb proofing.  It is as utilitarian in modern materials as the station itself was.

I thought I spotted in the PR stuff (but have now lost) some reference to public art – hopefully implementing the empty plinth idea first mooted by this website (like Trafalgar Square). There has been a lot of trumpeting for the construction trades who delivered the project and all credit to them, but as ever people have developed a blind spot to the huge cost over runs – £550m project total according Stanton Williams the architect against estimates of over £150million less when the project started.  This is why railways cost so much.

The immediate Kings Cross like any area around a major rail terminus anywhere in the world will never be all fragrance and light.  The real test now for the people who run the square (and we need to be absolutely clear about who is responsible for what to hold them to account BTP or the Met, TfL, NR or CC etc etc) is to maintain a safe and welcoming environment, look after people down on their luck and keep it clean and well maintained.  There’s a world of difference between the early spell with a PR budget and shiny newness and then living with a place long term when there’s no money and management interest wanes.  Just look at the depressing yet functional shanty town of food joints and cheap picnic benches in front of Euston, once itself a shiny picture of modernity.

Anyway it’s a lot better and we might now have to change the banner image of this site….

Active in Kings Cross London and South Oxfordshire, founder of Talk About Local, helping people find a voice online and a trustee of The Indigo Trust , Good Things Foundation and ThreeSixtyGiving as well as Connect8.
View all posts by William Perrin →
This entry was posted in Architecture, Kings Cross Station Refurbishment. Bookmark the permalink.