As part of the consultation process, many of us fed back to Network Rail a real concern the new public space would not be managed well. The result being worse than what we had before as the area attracts even more people. The scene on day two, in the middle of rush hour (08:30), proved our concern to be well founded. I’ve Tweeted the pics to Network Rail and copied Camden’s chief Sarah Hayward – who yesterday shared on Twitter: “Square already seems like a #Camden fixture” Indeed.

It would help if  readers could let Network Rail and Camden know scenes like below are not acceptable.

I will update this post when (if?) I hear back from Camden and/or Network Rail. 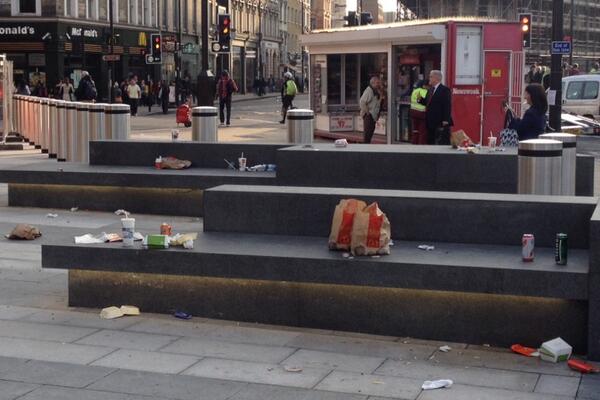 Sean Murray is the founder of Sean Murray Retail Marketing - a team of multi discipline retail marketing specialists and an urban activist in London's King's Cross - a hot bed of regeneration, wheely trollies and a one-way system we want to make history. http://www.seanmurrayuk.com
View all posts by Sean Murray →
This entry was posted in Kings Cross Station Refurbishment. Bookmark the permalink.