Posted on September 6, 2013 by Sophie Talbot

Local resident John Ashwell (trustee of King’s Cross Community Projects) is known here as ‘the tree man’ because he is responsible for the vast majority of street trees in the north east quarter of King’s Cross. He fundraised for them from the local community, identified where they were to be planted and liaised with Islington Council to match his funding, survey the potential sites, procure, plant and maintain the trees. Yesterday he wrote: 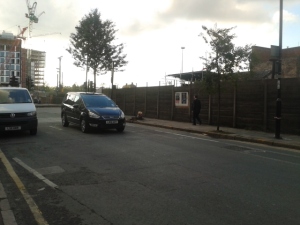 I am very saddened to see this beautiful Avium Plena gone from the western end of Wharfdale Road at the junction with York Way. Residents funded the planting of the original 4 Avium plena trees along that first block of Wharfdale Road about 10 years ago.

Although never officially proven, JC Decaux felled the four trees we’d originally planted there as they were hiding the unlicensed advertising hoardings on that section of the road. Residents campaigned to have the illegal advertising hoardings removed and the trees replanted with four new Avium Plena.

A bus moving at speed then wiped out the two trees closest to Crinan Street when it came around the York Way/Wharfdale Road. The two were replaced with the smaller winter flowering cherry trees that stand there now.

Now a lorry has destroyed one of the large two Avium Plena. The lorry drove off without leaving any details. Thank heaven it wasn’t a person being ploughed down – this time. Luckily there were witnesses so the company that owns the lorry can be identified and Islington Council’s tree department have stated they will investigate. I hope that a prosecution will follow and that, at the very least, the company involved will replace the destroyed tree with one of the same species at the same maturity – it would be a travesty if the replacement were a younger tree or smaller species; these by rights are community assets and should be respected as such. 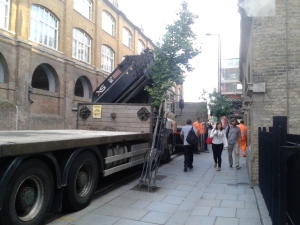 Our trees have not had an easy time of it since residents funded them. A Ginko tree on The Cally opposite Wharfdale Road looks to have had concrete poured onto its base. The soil around it needs to be broken up and the tree given intensive care until it comes back to full health. One of the Ginko trees at the entrance of E C Harris on York Way, along with its protective cage, has been knocked by a heavy vehicle leaving it badly leaning to one side. Several trees around the BAM construction site on Railway Street/York Way have been under scaffolding for some time. Ideally these need to be inspected and where necessary replaced with the same species at the same maturity. Those trees at the BAM site that have been recently uncovered need careful pruning to encourage them back to full health. 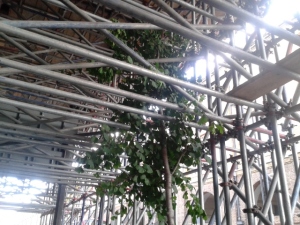 Yesterdays incident highlights yet again how dangerous the junction at Wharfdale Road and York Way still is. Whitbread (@WhitbreadPLC) intend to build a hotel on this junction.

The junction needs to be redesigned urgently. If it had been up to Islington Council it’s likely the redesign would have happened some years ago, possibly at the same time they redesigned Wharfdale Road by narrowing the traffic lane, introducing the cycle lane, zebra crossing and parking bays complete with physical build-outs for the trees. Islington Council has recognised the need for safe walking routes in this very densely populated area with a high proportion of children and disabled people. Unfortunately any redesign has to be approved by both Islington and Camden Councils and Transport for London (TfL – this site has documented how TfL is more interested in ‘smoothing’ motor traffic flow than in providing safe crossings for pedestrians or safe routes for cyclists).

Access into Wharfdale Road should be pinched to force drivers of large vehicles to slow down and take the bend carefully. The current poor design has no complete north/south or east/west crossings yet the desire lines here are clear. Pedestrians are forced to cross at what is a blind corner for motorists: from Pret a Manger to the site of the new Whitbread hotel. Pedestrian numbers have increased dramatically in the past few years following developments further up York Way. It is essential that there are full width crossings for pedestrians at this junction with the traffic lights fazed so that there is a complete break of traffic entering Wharfdale Road whilst pedestrians are able to cross safely. It must be very worrying for Whitbread knowing that the site of their new development is right on such a badly designed dangerous junction.