Vulnerable people banned from KX N1C – can it be true?

In a shocking article carried by today’s The Independent newspaper it appears that LB Camden has joined with with the property developers of the massive N1C scheme, home to Granary Square and the new University of the Arts building, to exclude or severely limit numbers of certain categories of people from accessing the 500 units of social housing being built as part of the scheme. 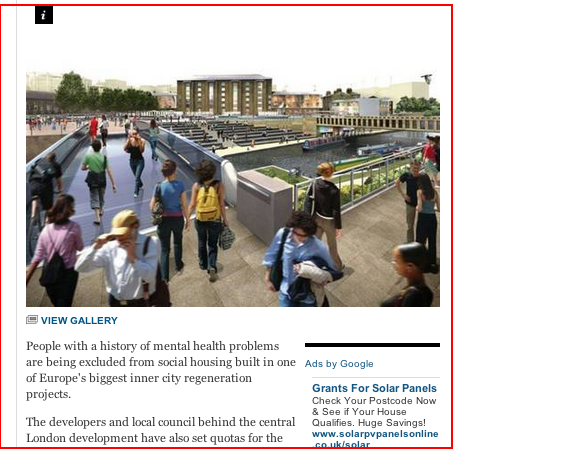 The excluded or limited categories are:

“Social housing construction was a condition for Camden Council granting planning permission for the £2bn development in 2006. Argent, the property company leading the consortium, says it will bring major community benefits to the area, which has been given its own postcode – N1C.

The exclusions and quotas were revealed after a series of Freedom of Information Act (FOI) questions were asked. On this site we tend feel FOI answers are a harder currency than comments made by those whose job requires them to hold a particular line because of political persuasion or profession. Because of these hard answers I for one am in shock this morning and left feeling physically sick at the thought of living next door to what may turn out to be a massive experiment in social engineering.

However, it would be great to hear from members at LB Camden and from the developers at N1C. Is this story correct? If so why? If not how will you be challenging it? Please get in touch. We’d love to carry a high profile correction article…

4 Responses to Vulnerable people banned from KX N1C – can it be true?