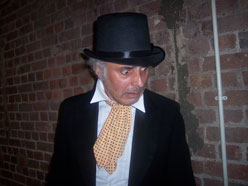 Celebrating 200 years since work began on the construction of the canal, Musical Flying Squad and London Irish Theatre are collaborating to celebrate of the achievements of John Nash, the canal architect and James Morgan, the engineer as well as the Irish navvies who dug eight miles through the London clay with pick and shovel.

Told in song, the story tells of the risks, political and personal intrigue and the financial deception which formed the backdrop to the creation of the Regent’s Canal. The navvies story unfolds with dramatic references to Irish mythology as they dig to create the Prince Regent’s vision for Regent’s Park and the canal to “rival Napoleon’s Paris” and link with “world trade and the industrial revolution.” The action centres around local and familiar landmarks and songs include plenty of opportunity for audience participation.

The performance will be the starting point for discussion on how immigrant groups, Irish and others have become part of London.

Kings Place is the perfect place to launch the London tour of twelve venues. The canal was proposed to solve London traffic jams caused by wagons with goods from the Thames colliding with wagons with goods from the canal at Paddington and when Kings Place was built the canals were once again used to beat the traffic as the construction materials were brought in canal barges.