Did TfL weaken pro cycling recommendations for killer Kings Cross junction as long ago as 2007? 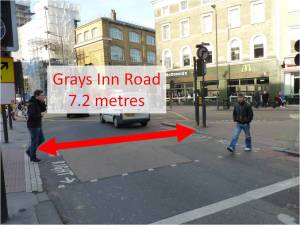 In 2006 TfL commissioned Colin Buchanan, traffic engineers to produce a cycling strategy report for Kings Cross.  This report isn’t widely known locally and I am indebted to Kaya Burgess from The Times for drawing my attention to the final 2007 report as we discussed the other Buchanan report on traffic modelling in Kings Cross.  There is also a draft version of the cycling strategy report from  2006. Cycle sources tell me that despite their bizarre modelling of Kings Cross without cyclists, under instructions from TfL Buchanan’s normally has a good cycle reputation.

In the draft cycle strategy report Buchanans made a sensible recommendation for the killer junction of Gray’s Inn Road, York Way and Pentonville Road:

‘An obvious solution is to convert the pedestrian crossings at the junction with Euston Road to Toucan crossings to enable access to the stations area and York Way, and for this facility to be clearly indicated well before the junction. The toucan itself should be as wide as possible to allow for heavy pedestrian traffic flows in addition to cycle traffic.’ [section ends]

A Toucan crossing is one with a button and lights for a bike and pedestrians to cross while the traffic is stopped.  In my opinion, had one of these been operational Deep Lee would not have met her end under a lorry as she set off from Gray’s Inn Road when the lights changed to green.  Indeed she would have set off on her own before the lorry, protected by the Toucan.

It’s worth comparing Buchanan’s view in the 2006 draft report with the text in the final report, as published by TfL, who paid for it in 2007:

‘One solution may be to convert the pedestrian crossings at the junction with Euston Road to Toucan crossings to enable access to the stations area and York Way, and for this facility to be clearly indicated well before the junction. The toucan itself should be as wide as possible to allow for heavy pedestrian flows in addition to cycle traffic. However, given the restricted pedestrian refuge and footway space at this location it is likely to prove difficult to achieve.’ [section ends]

A strong recommendation has been weakened and undermined by a caveat inserted.  Which organisation was responsible for these amends?   Some clues come from the helpful Camden Cycling Campaign.  In worthy, almost old fashioned way CCC minutes its meetings and publishes the minutes online.  CCC minuted a meeting of stakeholders to discuss the draft report on 13 December 2006 at Camden Town Hall.   The TfL representative, speaking for TfL CCE (Cycling Centre of Excellence) was reported by CCC as being:

‘very insistent on through traffic’

Button controlled Toucans are problematic if you want to maximise traffic flow – they take power away from road controllers and give it to cyclists and pedestrians to manage the junction on demand.  It seems remarkable to me that a TFL person from a Cycling Centre of Excellence should be insistent on through traffic – the volumes of traffic at the junctions are the problem for cyclists.

The caveat about this being difficult to do at the Gray’s Inn Road/York Way junction is nonsense – TfL controls the junction and can remodel it.  As they plan to do now.  But the current plans omit any sort of Toucan crossing.

The final report overall is damning about cycling in Kings Cross and the killer gyratory in particular:

There are major one-way systems in the area at King’s Cross and Camden Town, which can be intimidating for cyclists.

There are extensive one-way systems to the east of the study area. These are an important factor in consideration of cycling strategies as such an extensive area of one-way working poses a barrier to cycling

The net effect of one-way working is to speed-up motor vehicles due to the wider road width available, which can
create uncomfortable environments for cycling. In addition to speeding, the stretches of multiple one-way lanes also means that vehicles can move across lanes more often, which can deter cyclists from being able to make such manoeuvres themselves where necessary….

…The short to medium-term solution for this situation is to either establish alternative cycle routes that by-pass these areas or else provide access through them utilising such features as contraflows, or some combination of both.

This Cycling Strategy, although little known outside TfL has been around since 2007, setting out clear and present dangers to cyclists in Kings Cross.  At least one pro-cycle safety recommendation in the draft report concerning a junction at which someone was subsequently killed was weakened in the final report.   Why, over five years has no comprehensive action been taken to make the Kings Cross roads safe for cyclists once and for all time?

In possession of this evidence and not taking adequate timely action TfL has unambiguously failed in its duty of care to road users who have to use its junctions and must be held to account in the Courts for corporate manslaughter or some egregious breach of common sense health and safety law.

Active in Kings Cross London and South Oxfordshire, founder of Talk About Local, helping people find a voice online and a trustee of The Indigo Trust , Good Things Foundation and ThreeSixtyGiving as well as Connect8.
View all posts by William Perrin →
This entry was posted in Bad Gyrations KX Campaign, Road Safety in Kings Cross. Bookmark the permalink.

6 Responses to Did TfL weaken pro cycling recommendations for killer Kings Cross junction as long ago as 2007?