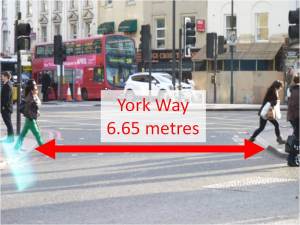 Our campaign on road safety in Kings Cross continues to attract cross party support and the themes we have helped articulate find wide resonance with Mayoral candidates.  We try here to remain non-Partisan, although that isn’t always easy.  I am aware that if it weren’t for an impending Mayoral contest we might not get as much airtime.  But we have been active on these issues for many years and the most recent round of activism was triggered by Deep Lee’s death, the timing of which was outside my control.

Here’s a round up of recent developments.

Kenneth Livingstone (Labour Mayoral candidate, former Mayor) has featured the corporate manslaughter issues we raised in his major interview with the Guardian today, using Bow as an example. This demonstrates how high cycling sfaety issues, including the prospect of corporate manslaughter inquiries are now in the Mayoral race (my emphasis below):

Q: Would you keep the blue down the road?

A: At the moment it is most probably more dangerous than safe, because people come into the blue lane and they assume there’s some sort of safety. The regulations on it vary from here to there. Suddenly it stops and starts on the other side of the road. Two cyclists who were killed at the Bow roundabout junction – there’s a classic example of what’s wrong. Transport for London spent ages negotiating with local cycling groups to put in cycling safety measures. Those went up to the mayor’s office. TfL specifically said this will not be safe for cyclists without these measures. The reply was: “The mayor’s priority is traffic flow.” Now they are in a great panic because of the police investigation. There could be a charge of corporate manslaughter. That’s the worst example

Q: Someone [benbro] raised this on the blog. He wants to know if you think there’s a strong case for a corporate manslaughter charge.

A: I think there is. It’s more obvious with the captain of the Italian cruise ship, but here Transport for London officials told the mayor’s office cyclists would be at risk if they didn’t put these measures in. They were turned down in order to prioritise – when Johnson says traffic flow, he means more speed for cars.

What we’ll do, we’ll get Jenny Jones, who was my cycling adviser and Green assembly member and she’s a candidate for mayor, she’ll be on this. She’ll be in charge of driving forward the cycling agenda. The TfL board is going to be chaired by deputy mayor, Val Shawcross. And we will prioritise putting in the safety measures that Johnson has put out.

Caroline Pidgeon AM (Lib Dem), Chair of the GLA transport committee has asked a series of excellent pointed questions of the Mayor, the answers to which I await with great interest:

If the junction at York Way/Pentonville Road/Grays Inn Road does not comply with TfL’s standards when did you first become aware of this fact?

If the junction at York Way/Pentonville Road/Grays Inn Road does not comply with TfL’s standards please explain why TfL has failed to act to make the junction compliant with its own standards?

Please explain what correspondence TfL has had with the Metropolitan Police about the compliance of this junction at York Way/Pentonville Road/Grays Inn Road?

Please explain if there are other junctions on the TfL road network that are not compliant with TfL’s own standards and when they will be rectified?

Lobbying by not least by Jennette Arnold AM (Labour) and local Cllrs has led to a commitment from Tfl to do a review of the gyratory.

Jenny Jones AM (Green) continues to support local cycling safety through her attendance at local protest rides and more.

We continue to be indebted to our local Councillors Paul Convery (Labour, Islington) and Paul Braithewaite (LibDem Camden) for their unstinting support not least to make it clear that TfL simply can’t blame the boroughs.

Active in Kings Cross London and South Oxfordshire, founder of Talk About Local, helping people find a voice online and a trustee of The Indigo Trust , Good Things Foundation and ThreeSixtyGiving as well as Connect8.
View all posts by William Perrin →
This entry was posted in Bad Gyrations KX Campaign, Road Safety in Kings Cross. Bookmark the permalink.