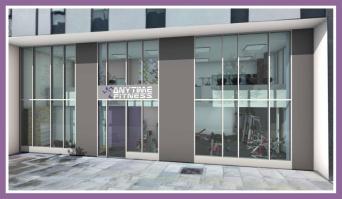 Since late December Kings Cross has a new gym.  It is  called Anytime Fitness. The medium-sized gym is located on the ground floor level in the Nido Complex at 200 Pentonville Road, appropriately enough next door to the shop Cycle Surgery and Runners Need.

This opening comes at a time the Kings Cross community gym One KX has stopped operating as a gym,  just a few years after its own respective opening.  1KX will now be redeveloped as a community participation and enhancement facility.  One of the weak points of the 1KX gym was that its opening times simply didn’t suit the working population, being shut early in the evening and sparingly on weekends. Central YMCA who managed the facility on behalf of LBC Camden writes that there were problems with noise transmission to residents.

Anytime Fitness is a franchise that originated in Chicago and problems with restricted opening hours are not one of its weaknesses. This new Kings Cross gym is open 24 hours, seven days a week and on every day of the year, bank holidays included.

In central London there is only one other gym like it, a Fitness First gym near Oxford Street, which for Kings Cross residents and workers is still quite a journey on a rainy or cold day. Anytime Fitness Kings-Cross Manager Neil Croft explained to me that this new gym is a matter of equality. Restaurant owners, postal workers, railway workers, medical workers, and journalists to name but a few, may all appreciate the chance to work out late at night or early mornings.  Most parks around Kings Cross are closed at dusk, leaving little space for exercise in the evening, and the two nearest existing gyms at Kings Cross also close in the late evening.

The opening of Anytime Fitness is another first in fitness matters at Kings Cross. Argyle Square was one of the first locations to host an out-door gym facility in Camden (with Camden being one of the nation-wide pioneers). The square also was one of the few places to receive a Nike sponsored street-basketball court.   Now the Kings Cross branch of Anytime Fitness is the very first branch the franchise has opened in London (the third in the UK).

So how do they do it? Neil explains that the brightly lid gym, with see through windows from the outside, has an extremely tight camera surveillance system.  Members also get a direct telephone number to call the security surveillance team at any time.  They also receive personal alarms and there are alarm buttons provided in the gym and on monitors members can even see the surveillance team whilst talking to it. Neil says 17000 of the Anytime Fitness gyms already in operation across the world (mostly in the USA) have proven that a 24/7 opening system of this type is not only practical and in demand but also safe. Still a sign at the Kings Cross entrance reminds members to take personal communication tools with them. You don’t want to get caught in the gym alone at 3 am and be unfortunate enough to have pulled a muscle, not being able to move, and not able to call a friend for help (what the friend will say about being woken up by that fitness-eager companion at three in the morning is another matter).

Equality is also followed through in terms of access for people with mobility issues. With Kings Cross / St. Pancras now having finally become a half decent wheel-chair accessible underground station, it is nice to hear that all three gym floors are accessible by elevator, and that a special toilet and shower-room has also been provided. The equipment is standard gym equipment (treadmills and other cardio-vascular machines, resistance machines and free weights) of which some can be used by wheel chair users, but it is fair to say that it is not a gym that is specialising in equipment needs for all impairments.

Furthermore the gym is actually staffed in the day-time and instructors and personal trainers are enthusiastic to provide guidance and help. Neil explained that some of his staff are experts in exercise with cardio-vascular diseases and other health conditions.
I asked Neil what he thought of being placed at Kings Cross. He said he noticed, as in most areas in England, a disproportionate amount of fast-food restaurants, making it ever so easy for locals to become overweight and obese.

He also said that the gym provided value for money in terms of local gyms in the Kings Cross area: “Some gyms in this area charge over 70 Pounds per month. Our concept ensures that running costs are kept low, and this advantage we pass on straight to the customer.”  Memberships are valid not just here in Kings Cross but in all branches world-wide.

I was quite impressed, actually, both by the 24/7 concept and also with a little bit of pride, that once again the London Kings Cross locality appeared to have convinced investors that it is the place above all others in London for them to go and spend their money.
We already have quite a few 24 hour bars and eating places at Kings Cross.  But in contrast this 24 hour facility appears to become one of the players actually making air-polluted Kings Cross people healthier and fitter.

One would hope that the gym will therefore liaison also with some of the local community groups, businesses and health services.

This entry was posted in Local businesses. Bookmark the permalink.