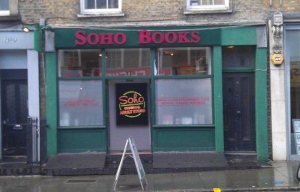 For more then ten years No. 9 Caledonian Road has been a Licensed Sex Shop…. but most local residents never realized this as it’s license from the Council contained several Conditions that probhibited the premises from advertising “adult” materials in the window and forbad the use of the typical red neon sign Adult Sex Shop(allowed only inside the store and not visible from the street).

Suddenly however and without notice to local residents (or even our local Concillors), this has changed as the shop has “redecorated” its frontage.  This new look has created outrage as  it now looks like what it is – a sex shop.  Already numberous emails expressing displeasure have been directed to our Councillor who appears to have been just as surprised as local residents.  He has responded quickly and has been working to get the matter resolved.  The Bulletin Board has now heard from Jan Hart, Direct of Public Protection.  Here is what she has to say about the situation:

To clarify, the shop has been licensed for several years and the renewal was advertised on the premises and in the local press as is required for these applications. The notice was displayed on the shop and checked on the 13th May, the advert was in the Islington Gazette on the 10th May.

Ward Councillors were consulted on the renewal. The improvements we could have made, would have been to go further than the legal requirement and explain the detail of the renewal when writing to ward councillors, as well as contacting local residents who we knew were interested in previous applications. It is this that I will be implementing from now.

The policy we have on sex shops is that no more will be allowed. The spirit of the policy is that those in place will be allowed to continue, however should there be a change in ownership, then the recommendation would be to refuse.

I will be meeting with the owner later this week.   I will be advising
him that the frontage is not acceptable. A reorganisation of the shop and some internal changes would allow it to be as before with no advertising or signage on the window or door.  The current advertising on the windows does not satisfy our conditions, the front door should not be open displaying the internal sign and the whole arrangement allows products to be seen from the street, which should not be the case.

I will contact you again after my meeting next week.

We will post further updates as they are received.

This entry was posted in Planning, Licensing and Regulation. Bookmark the permalink.